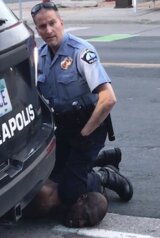 Similarly dogs are very useful
If one for example owns sheep

Having sheep one requires dogs
They each have particular uses

Dogs, see, have a dual purpose
Sheep, bless them, only one

The dogs guard the sheep
While they graze and fatten

The dogs then herd them
To be safely delivered

To the slaughterhouse
To be prepared for the table

Police and politicians
Forsworn and redefined

The Next (Goose) Step

THE NEXT (GOOSE) STEP

The “top” one per cent
Terrified, naturally
Of those they exploit

“Facebook has been complying with law enforcement to censor activists and human rights documentation, including videos of police violence.

Facebook’s videos and platform are powerful tools to document human rights abuses. And we’ll need them more than ever under the new presidential administration.

Activists have reported various incidents of Facebook’s censorship or compliance with police, including: censoring accounts of activists covering the civilian uprisings in Charlotte, NC; the removal of live footage of water protectors against the Dakota Access Pipeline; and reports that Facebook sent data to help police track and surveil protesters in Ferguson, MO and Baltimore, MD.

This sets a dangerous precedent. Trump’s administration will no doubt increase law enforcement’s requests of Facebook. Facebook needs to stand firm now and be accountable to the public, including by clarifying its policies on removing content at the request of government actors. Facebook cannot be an arm of the police.

Facebook has come under fire lately for NOT censoring fake political news, which may have contributed to the awful results of the presidential election. However, real news, powerful news that depicts human rights abuses, is being broken and then shared on Facebook. The least Facebook can do is stop complying with law enforcement to censor such content.

Already, with Trump coming into office, movements against entrenched power are at risk of being silenced. Trump and his administration will not respect the First Amendment. Facebook must not assist them in violating freedoms of expression.

Now more than ever, we need all the tools we can to protect marginalized voices, particularly voices of people of color.

Sign the petition to tell Facebook’s CEO Mark Zuckerberg: Do not censor human rights documentation. Do not act as an arm of the police, especially under the new administration.”

Above The Law Man

ABOVE THE LAW MAN

As savage as institutional bigotry
Sworn to protect (but to protect what?)